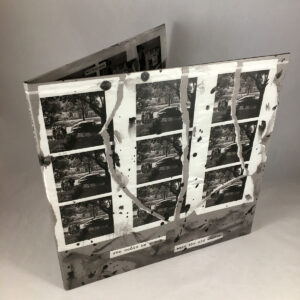 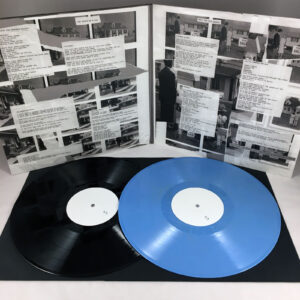 norway’s you could be a cop and amid the old wounds from germany team up to deliver 4 emo songs each on this beautiful split LP. ycbac provide almost 20 minutes of dreamy, heart on your sleeve, nostalgic indie-emopop with postrock-bits not unlike rainer maria or jejune. atow offers up 4 songs at roughly 12 minutes, 3 of which have been written almost 18 years ago but mostly left unnoticed (although one of them has originally been performed by wishes on a plane), the fourth being a cover version of no use for a name’s ‘let it slide’. musically you can again expect living room athmosphere recordings of an acoustic guitar and a voice, heavily influenced by early 2000’s emo heroes like the get up kids, the new amsterdams or bright eyes.
records have RPM speed numbers handstamped onto the center labels (33 for ycbac, 45 for atow) and come in a beautifully designed cut-and-paste-collage-style gatefold cover. available in sky blue and black vinyl. this will officially release august 23rd, you can order it now for a chance to hold it in your hands on release day.

we also made some videos to some songs:

as always, labels and distros please get in touch for trades and wholesale