you could be a cop / amid the old wounds split LP

20 minutes of dreamy, nostalgic indie-emopop on one side, 12 minutes of living room atmoshere acoustic emo/folk on the other, packaged in a beautiful collage-style gatefold sleeve

listen to some music:

norway’s you could be a cop and amid the old wounds from germany team up to deliver 4 emo songs each on this beautiful split LP. ycbac provide almost 20 minutes of dreamy, heart on your sleeve, nostalgic indie-emopop with postrock-bits not unlike rainer maria or jejune. atow offers up 4 songs at roughly 12 minutes, 3 of which have been written almost 18 years ago but mostly left unnoticed (although one of them has originally been performed by wishes on a plane), the fourth being a cover version of no use for a name’s ‘let it slide’. musically you can again expect living room athmosphere recordings of an acoustic guitar and a voice, heavily influenced by early 2000’s emo heroes like the get up kids, the new amsterdams or bright eyes.
records have RPM speed numbers handstamped onto the center labels (33 for ycbac, 45 for atow) and come in a beautifully designed cut-and-past-collage-style gatefold cover, created by chaz hewitt, known for his artwork for human hands and you could be a cop’s first physical release, the self titled 12″ EP from 2017. each copy includes a mp3 download card

releases august 27, 2021 and will be available digitally as a split from time as a color and slow down records’ bandcamps.
all songs will also be available seperately through digital distribution on most common and uncommon platforms, we also made a playlist on spotify that includes all the songs (atow songs available from the 27th): 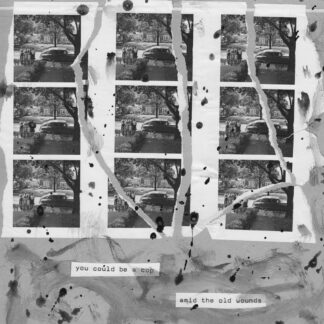 You're viewing: you could be a cop / amid the old wounds split LP €14,00
Select options