collection of duct hearts’ early works, released between 2009 and 2014 on various 7″s, splits and compilations.
baby blue cassettes with 6 inlay cards with lyrics and info wrapped in screenprinted patches and held together with a paper stripe. only 70 copies on cassette were made. includes download code

cassette version has a bonus acoustic version of shell, which is limited to this release

since the band’s founding in 2009 duct hearts have cumulated quite a noteworthy vinyl back catalog. this album collects all songs from their split 7“ with mio, the 4-way 7“ with kids return, the rabbit theory and eucalypt, which was part of the „leave nothing but footprints, take nothing but photographs 7“ series, the „my heart in your hand“ 10“ with human hands, manku kapak, asthenia and nebraska, the split 7“ with lorraine, the daydream fit and dotlights, the split 7“ with laube as well as the band’s debut 7“ „if you prick us, do we not bleed? 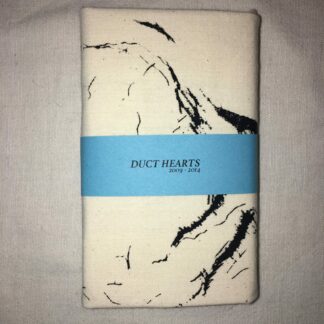