A new and literally titanic discographic project for the ORNAMENTS, a post-hardcore instrumental band that with the complicity of INRI and Tannen records will return to be talked about thanks to the publication of the concept album DRAMA.

The album is loosely based on the tragedy of Aeschylus “Prometheus chained”, where the Titan, guilty of having given a gift to the men of fire and hope, is condemned by Zeus to be chained on a rock with the liver eternally devoured by a raptor.

The violence of this punishment is evoked since the beginning of the work awakened by the sound of the chains and accompanies us through the traces dressed in the mythological figures that in the original work approach Prometheus, questioning and sympathizing. Between suggestive chords, stage sounds and songs in a harrowing and unknown language interpreted by Lili Refrain, one lives the drama of the immortal hero who too loved man. The succession of the pieces of the disc follows the logical thread of the eskylean drama, drawing an emotional crescendo and indicating an obligatory and optimal listening path between cruelty and divine piety.

Dedicated to an imperishable symbol of rebellion and freedom, DRAMA is a musical journey of catharsis between confrontation and purification, a journey of sound that is enriched by a careful artwork and is testimony to the refined musical research that distinguishes the work of the ORNAMENTS who left the world of medicine with Pneumologic and gone through the graphic fantasies of Metamorphosplit and the science of Cymatic are ready to appear with respect in the classical Universe.

Be the first to review “ornaments – drama 2xLP” Cancel reply 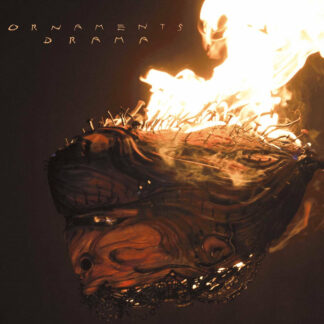