The second album “Travelling ants who got eaten by moskus” took on a different direction. While building on their post-rock fundations, there is a hunger for new styles and sounds that push the songs into indie-rock territories. The tracks are dirtier, bolder and introduce vocals to the mix, including the untamed “Man don´t walk” which became a hit on the european alternative scene.
The obvious differences between these records are undermined by the strong and carachteristic sound that makes The Low Frequency in Stereo so special.

Records comes in a gatefold sleeve with new liner notes and includes a download-code.
Second pressing, limited to 300 copies, handstamped 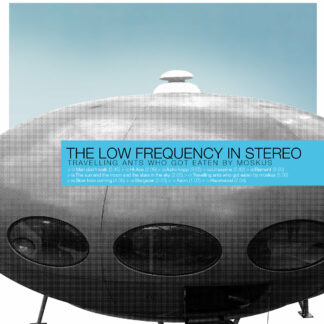 You're viewing: the low frequency in stereo – travelling ants who got eaten by moskus LP €16,00
Add to basket