I bet you guys thought the only good thing to come out of Boston was Killswitch Engage and metalcore. Well you’re wrong, as Veloz kick out some serious hardcore inspired jams, for the thinking man!

This 7″ was put out as a dual release by Parade of Spectres and React With Protest. The artwork on the sleeve of the record in very intricate and brooding, the lyric sheet is hand written inside the sleeve and the music itself comes on a nice slab of black vinyl.

The 7″ itself feature 5 short blasts of raging hardcore noise, more akin to the harshest
screamo, as demonstrated by opening track Wake The Plague. The instrumentation is chaotic and in combo with the vocals, make for an intense listen.

Second song Killer Fiction incorporates some nice clean, off kilter guitar to add a sense of melody. There’s a strong sense of melodic influences in Veloz’s music, but it’s put across in such a way that it takes a few spins to pick up on the subtlety of it.

Yggdrasil shows splashes of math-core within it’s structure and the intro to Demon Parasites has glimpses of thrash in it, but I’m not going to compare Veloz to any other band, because I don’t feel it would do them justice!

And so I hit last song Second Nature with a big sense of excitement, as much like the other 7″s I’ve reviewed recently, I’ve been blown away by Veloz and Sleipnir. The sense of melody mixed in with the chaos and hardcore inspired touches, make this record a thrilling listen, and while short, it’s crammed with ideas that keep you hooked and concentrating to final note has ended. I’d strongly recommend you hunt this record down and buy it!

It’s really cool to know that a place that I had known for it’s metalcore heritage, is harbouring bands like Veloz, who have an identity and an originality beyond that of the “name” bands that come from their locale. The fact that they’ve also been brought to peoples attention by two great independent record labels, is even better. I sure Veloz will continue to product exciting music and I’ll be waiting in anticipation for what’s to come.

(this noise is ours)

Be the first to review “veloz – sleipnir 7″” Cancel reply 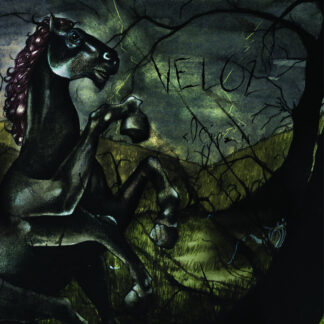