Their sound is brash, chaotic, and almost unbearably visceral, whilst containing enough light-speed intricacies to satisfy all you tech nerds out there.

With such a wealth of new music available at our finger tips these days, it’s easy to feel a little jaded whilst trawling through the swathes of half-hearted, ennui inducing bands on your quest for new riffs. It’s worth persevering, however, as occasionally you’ll inadvertently stumble across one of those bands that immediately strike you right in the pineal gland and momentarily restrict your vocabulary to a single, loudly exclaimed “FUCK!” Like, for example, The Heads Are Zeros…

The Baltimore based trio have just released their debut EP, ‘All The Men I Love Are Dead’, and it’s an absolute blinder. Their sound is brash, chaotic, and almost unbearably visceral, whilst containing enough light-speed intricacies to satisfy all you tech nerds out there. There are similarities to Cloud Rat’s passionate, cathartic grind assault, but with a healthy dose of head-spinning, Daughters-esque math-core madness thrown in for good measure, and man, does it work well! Like all the best technical bands however, The Heads Are Zeros are less concerned with displays of virtuosity than they are peeling back the top layer of your skull and short circuiting your brain with the most anarchic and disorientating riffs they can muster.
(terrorizer.com) 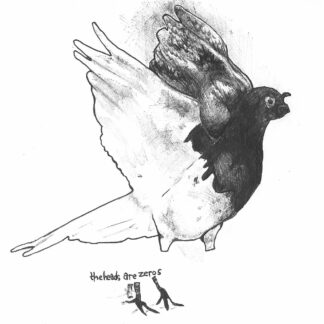