The new LARKIAN album “iterations:alterations” comes as a 2xLP with a psychedelic screenprinted cover. 4 songs of guitar based drone/ambient, that slowly build up a huge wall of noise & sound.

In the opening moments of “Cobb”, the guitar of Cyril Monnard is scattered into tiny droplets of delay. Pinch harmonics patter like light rain, pre-empting the onset of worse weather. Low notes start to join them. Slowly, it intensifies: leads shower overhead, gradually becoming a heavier stream of interwoven harmony. Before long, the stereo field is a monsoon of distortion and swirling melodic phrase, cascading down from the sky above until every inch of air is drenched in glistening tone and the fizz of amplifier electricity. I can no longer hear those scattering pinch harmonics, which presumably still exist somewhere within; droplets of fragility engulfed by gigantic splashes of sound. Iterations : alterations demonstrates how even the most delicate, seemingly insignificant actions can act as the foundation for panoramic event. Each of these tracks starts out with unique flutter of a butterfly wing, tracing the cascade of causation as it multiples and expands into symphonies of loop and saturating echo.

The manner of this evolution feels organic, withholding the stronger impulses of human creativity to fully embrace the drift of natural, earthly consequence. Like all the most compelling loop music, each layer beckons the one that follows, forming a daisy chain of open ends and perpetuated suspense. None of the melodies feel like a closed, complete shape. When “Sören” begins with a gentle ascension of three notes, it seems to hover above the ground in a state of timid expectation, waiting for the earth to rise up and swallow it from beneath. Sure enough, the sound blossoms into shivers of white noise and a choral wave of guitars, before the bass frequencies start to quake and undulate at the hands of low synthesiser tones, like solid ground rippling in mimicry of the sea. The thread of unfolding is dramatic, but ultimately inevitable; Larkian is just along for the ride, clinging to the rope of present tense that runs along the passage of time, navigating a music that shimmers with a sense of obedient pre-destiny. One on hand: an exquisite piece of guitar-centric sculpture, traversing the spectrum of melodic fragility and enveloping noise. On the other hand: an album that sounds as though it may have written itself, guided forth by Larkian’s gentle nudges of intuition, but ultimately steered by the inexorable glide of fate. (http://www.attnmagazine.co.uk/music/10199) 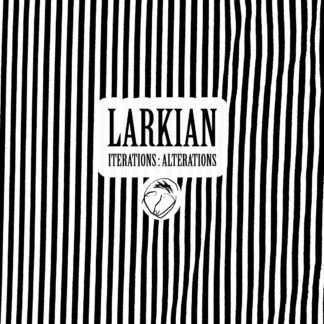