Like it isn’t even a competition when you flip this thing over and hear what Heads are doing versus what Neck First did. all-male metalcore vs a transcendent, female-fronted grindcore trio

Last year, I caught Wet Brain headlining upstairs at the Ottobar and oh man was it awesome and opener Hive Bent was great too, but I also had to endure some all-male out-of-town band that shall remain nameless. They did a tedious, ding-dongy Dead Kennedys impression and it was but another time in which I saw a punk show and had to keep from falling asleep at the sight of a bunch of white men flopping around and freaking out on the stage like they aren’t predictable and privileged ninnies trying to pretend it is still hardcore’s early ’80s boys club. That isn’t exactly the case on this split 7-inch between Neck First, an all-male metalcore band, and The Heads Are Zeros, a transcendent, female-fronted grindcore trio, but listening recalled that “oh brother” moment about dudes and punk because here, The Heads Are Zeros’ two tracks by sheer fuck-all-y’all force of energy and rarefied intensity, render Neck First’s stellar but dudely contributions a little irrelevant. To be clear, Neck First’s two tracks here are special and brutal in creative ways: ‘A Gap Between Two Currents’ melodramatically, ambitiously teases its breakdown for far too long, busting the whatever-core template wide open, and the aptly titled ‘Prelude to Perfect Form’ is all-comedown, a 48-second shot of pure, poking energy.

But all of that feels so whatever man once The Heads Are Zeros’ Olivia Henry coughs and grunts and cries and wails on these two tracks, backed by the band’s soaring grandiosity. Especially on ‘The Harvest,’ especially in conjunction with Henry’s vocal fearlessness, that, sure, scan as the screaming stuff the subgenre demands but also color totally outside the lines of what this vocal chord-scraping is supposed to sound like and results in something singularly harrowing. Like it isn’t even a competition when you flip this thing over and hear what Heads are doing versus what Neck First did. And on ‘Songbird,’ there’s a fraying-at-the-seams freneticism to the delivery separate from the throaty things and it sounds like a nervous, talking-to-herself jitter (assisted by Henry’s confessional-poetry-like lyrics; Henry also did the artwork for this release, by the way) and it’s like that demon birth in the subway scene from Andrzej ¿u¿awski’s “Possession,” in song form. The sort of challenging, discomfiting, unrelenting, all-out catharsis that you rarely confront in any kind of art, let alone a noisy punk 7-inch in 2015.
(citypaper.com) 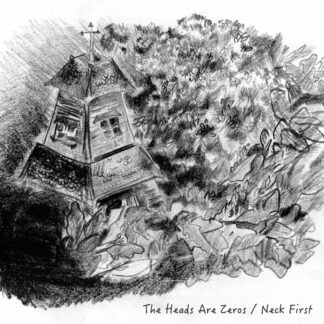