A band embodying the notion of community is a sight for sore eyes as the world moves into post-2020; Canada’s Respire stands firm as one of the most forceful in the realm of new screamo and post-hardcore bands, pushing what it means to encourage diversity and representation within the roots of art.

Respire is an six-piece band from Toronto, Canada, who plays orchestral post-black metal with epic post-hardcore and screamo. This is the third full-lenght record.

Since their formation in 2013, Respire have been an unwavering light in the Toronto DIY scene; with prior releases (2016’s Gravity and Grace and 2018’s Dénouement) refining the band’s orchestral post-rock and viscerally sharp 90’s screamo influences. With their already accomplished history and an extended family of contributing musicians in tow, the band have forged their spirituous third album Black Line.
Written over two years and produced over six months, it is a masterful exercise in sonic scope and overwhelming swells of fervor.

The ceremonious opening of ‘Blight’ breaks into the rolling thunder of ‘Tempest’ where the album bares its teeth – black metal blast beats are met with serrated guitars and vocals that are incomparable in their power and drive forward with Deafheaven-esque determination. Moments like ‘Cicatrice’ and ‘Embers to End’ allow Respire to display their uncompromising strain of blackened hardcore with enveloping pressure, whilst

‘Lost Virtue’ and ‘Flicker and Faint’ are pure grandeur and beauty with group vocals and string arrangements that nod to Envy’s more striking crescendos.
Warm and often elating, these tracks are intended to anchor the listener from the first note.

Black Line is colossal, a swirling void that draws everything around it to its center. Despite the towering lattice of classical instrumentation and thundering hardcore that swathes the listener in a sensory cathedral throughout, Respire still carve out hope as a result; Black Line is equal parts a call to arms as it is a celebration of self in the face of the worlds blight. 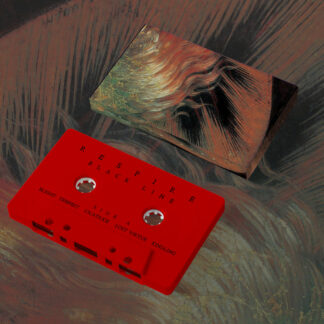