The first track, Intro, is basically a lead in of daily city noise getting increasingly louder and more distorted until thunder and rain break into silence and then the music starts. The slow strumming of the opening guitar riff of the first song, Reproduktismus, already gives me a hint that an epic style song in vein of NEUROSIS Approaches. Eerie sounding guitar riffs, intense, death metal style drumming, and scratchy vocals from singer, Jonas, soon becomes the norm with this album. The songs blend into each other giving you the one-track album effect. Another thing that I noticed is it feels like the riffs coming from guitar players Timo and Gerritt tell a story of their own. Such is the case with Circles. Beginning with static then evolving to a song that has a lot of AT THE GATES influences present. The next song, Towards Sundown, has an interesting spoken word part in German that I will never know what the hell he is saying, but OK! It sounded cool. Bassist, Karl, and drummer, Justin seem to lock in well with each other throughout the whole CD. I have always felt that albums with an average song length of 6 minutes or more run a high risk of losing the listener early in the CD, but these guys passed the test. The last two songs, Thralldom and The Machinist, basically continued in the same direction of the rest of the songs on this album. 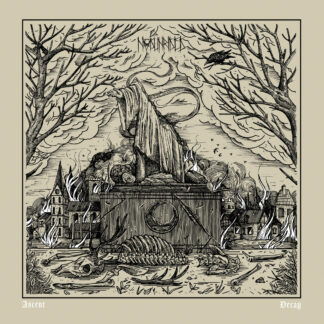