Timing is everything. Pelican is testament to this. Their first two releases, 2003’s crushing Australasia and 2005’s scenic The Fire In Our Throats Will Beckon the Thaw, garnered considerable praise from the press and won Pelican fans from both the metal and indie sides of the aisle. But as the Post-Metal scene expanded into it’s current super-saturated state, Pelican got lost in the shuffle. By the time the band released their third album, City of Echoes, there were hundreds of recent start-ups that had already made that record, making it a common target of message board slagging and used bins. Now, two years after the mundane City of Echoes, Pelican are set on reclaiming their spot as one of Post-Metal’s top dogs with their new EP, Ephemeral.

Ephemeral is Pelican going back to basics. The sonic exploration of the lighter side of their music that has progressively creeped out more and more since The Fire In Our Throats… has been scaled back, clearing the way for the return of the groovy doom infused instru-metal of the Australasia era. The album’s title track is Pelican doing what they do best: offering up colossal slabs of churning, low-tuned riffage, offset by delicate but dreary lead work. Even the drums, which have always been Pelican’s Achilles heel, seem less lackadaisical than what has come to be expected from the quartet. In true “getting in touch with our roots” fashion, and what also manages to be the highlight of the album, Pelican close out Ephemeral with a cover of Earth’s “Geometry of Murder”. On it, Pelican are joined by Earth’s Dylan Carlson on guitar, adding another layer to the gorgeous, pummeling guitar assault.

Ephemeral accomplishes two things. It is a brilliant return to form after the missteps on City of Echoes, and it also firmly places Pelican back on top of the Post-Metal sprawl. It is not often that a band that has drifted so far from their original sound is able to return to what they do best and without missing a beat.

Be the first to review “pelican – ephemeral LP” Cancel reply 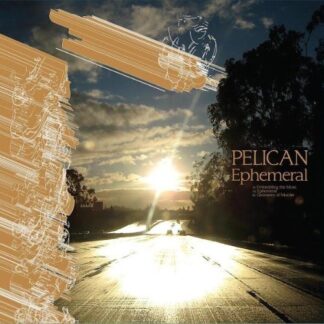