If you were to write Hexis off based solely on the knowledge that they’re yet another in a long line of blackened hardcore bands, you could hardly be blamed. There are plenty of these types of groups running around out there, and many of them aren’t worth a damn. However, Hexis is the exception that proves the rule. On the Danish quintet’s debut full-length, the band mercilessly plows through 35 minutes of apocalyptic rage like a pack of demons the album is named after.

Although the band definitely fit the blackened hardcore descriptor, Hexis don’t play the sort of music you would typically expect from the microgenre. There’s nary a d-beat to be found on Abalam and no chugging breakdowns to tell the crowd when to start a circle pit. Instead, the band strips hardcore to its vestigial essence and incorporates that into massive walls of post-black metal noise.

The hardcore influence is subtle but undeniably present. The dueling call-and-response vocals on “Exanimis” hearken back to the 1990s heyday of the style, while frequent use of dissonant guitar chords and feedback reek of the sub-genre’s more metallic predilections. The vocal delivery itself, courtesy of Filip Andersen, is also reminiscent of hardcore’s style and pacing, but shrieked instead of bellowed in most cases.

The hardcore aspects of Hexis’s music, as raw and broad as they are, mesh well with the lumbering, shambolic post-black metal dirges the band creates. Hardcore generally draws its power from urgency and unbridled fury, but when tempered with a blizzard of guitars and blasting drums the tracks on Abalam sound absolutely monstrous. Each song blends into the next as wave after wave of sound crashes into your head, hammering you into submission.

Abalam is a good album. There’s no doubt about that. What’s even more astonishing is it’s Hexis’s first full length effort. The band built up to this with a series of EPs and splits, but this is still a surprisingly solid freshman LP. With that being said, there are still some weaknesses that keep Abalam from achieving true greatness.

For one thing, the songs can lapse into monotony on occasion. Initially the sheer heaviness and furiosity of the music is captivating; the second track, “Tenebris,” sinks its teeth into you immediately. But by the time you reach the titular sixth track, an instrumental piece, you essentially know what to expect for the second half of the album.

The final track, “Inferis,” is a welcome and drastic change of pace. It’s an eight minute slog of sludgy doom metal that demonstrates the band knows what they’re doing even when slowed to a crawl. However, the song may have worked better as a midway point that broke up the relentless (and repetitive) sonic violence of the rest of the album.

Abalam isn’t perfect. It certainly has its flaws. But keep in mind this is Hexis’s first full length album. With more time to refine their sound and explore other musical avenues there’s little doubt that these guys are capable or much greater things. Hopefully they keep at it and deliver something really remarkable in the years to come. 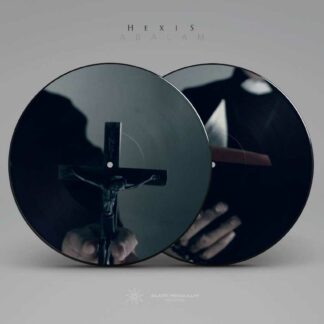