kissed by an animal – s/t LP

“…a power-noise-pop treat with crunchy guitar, hard-edge drumming and a fluid bassline.” ~The Deli

yellow vinyl in gatefold sleeve. covers are near mint to mint, may show a tiny dong or slight imperfection. inner sleeve shows a small seam split

Kissed By An Animal is the auditory counterpart to the universe of illustrator/musician Dima Drjuchin. Dima is known in the art world for his rich surreal scenes plucked from an alternate dimension existing exclusively in his own mind. You can find his work on countless album covers from artists like Father John Misty, Brad Mehldau, and Reggie Watts. The debut LP from his band, Kissed by an Animal, articulates the chaos of his visual world through soaring guitar solos, unrelenting drums, and instantly memorable melodies that you will be singing to your grave – seriously. The marriage of Dima’s music and his visual style is on harmonious display in their video for the single “The Good Times are Here Again”, which depicts illustrated versions of the band performing in a technicolor dream world of Drjuchin’s creation.

Joining forces with veteran Brooklyn musicians, Jon F Daily (drums) and Tsugumi Takashi (bass), the band self released their debut LP on cassette in 2019 to rave reviews and is now being released on vinyl by Handstand Records. Kissed by an Animal wears its influences on their sleeve – from The Misfits to the Cure, from Dinosaur Jr to A Flock of Seagulls. You’ll be pulled in by the instantly catchy melodies, you’ll stay for the relentlessly driving rhythm section, and you’ll be disappointed when the song is over before you’ve had your fill.

Kissed by an Animal has been gaining notoriety amongst their peers in the Brooklyn DIY community playing loud, tight, and short sets along to their psychedelic projections animated by Dima himself. Claiming DIY venue, the East Williamsburg Econo Lodge as their home, KBAA establishes themselves as a rare gem in the Brooklyn scene, attracting diehards and casual listeners alike – so we guarantee you’ll be into it too.

“Sitting squarely at the intersection of fuzzy lo-fi pop and 8th-wave slacker psych, Kissed by an Animal’s eponymous debut album is one of the best things to come out of the Brooklyn scene in recent memory.” ~Sweet Static 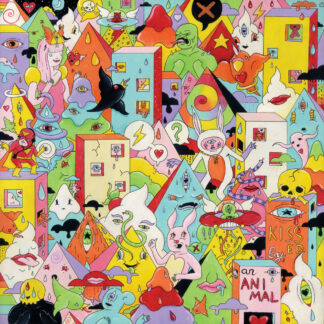