In the four years since the release of Dust of This Planet, Brooklyn all-wave trio Matte Black has been honing its sound into something more direct and organic than ever before.

With new album press cycles, bands often claim to be heavier or “getting back to their roots” in comparison to past works, but on Psyche, the band burrows into the core of its own sound rather than striving to build things outside of itself. Like its predecessor, Psyche was tracked to two-inch tape at The Seaside Lounge Recording Studio by Mitch Rackin, who mixed and mastered the album as well. The sound achieved by this collaboration is simultaneously live and raw while having enough clarity for the listener to gather new, nuanced details with repeated listens.

Accompanying all the sonic art is haunting cover artwork by Brazilian illustrator Filipe Mesquita. Much like Matte Black’s own art seems to come from a sense of mutual understanding between the members of the band, the cover for Psyche effortlessly embodies the emotional journey of the album without overstating it. With such a focused, unified vision, the intensity of Psyche comes through naturally rather than with bludgeoning force, allowing the listener to meet these songs on their own terms. Matte Black aren’t playing into a “scene” or hoping to score points, they’re simply delving deeper into the essence of the band itself, with all the beauty, horror, and immensity that comes with it.

Limited to 200 copies on black vinyl with undulating phenakistoscope center labels. Animations work best on video under bright light at 24fps or using a strobe light to view with the naked eye. 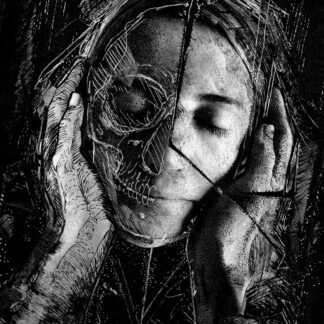