very limited edition we made for tour in june 2016, 50 copies were made and include a handnumbered piece of black paper. black vinyl
black and white screenprint on heavy rough grey record sleeves, most come with the same insert as the original release, around 10 copies have black on white a5 xeroxed inserts

also comes with a screenprinted black or brown tour poster

Duct Hearts approach this 7” from a more atmospheric angle than that of their recent split. If You Prick Us, Do We Not Bleed? begins with a tuneful yet introspective build-up featuring melodic guitar that lasts nearly two-minutes. Once past that point the volume level rises with the sound of distorted guitars and drums, before fading back down. It’s really enlightening to hear and reminds me a lot of earlier bands like Time Of Malta and Cave In, to some extent. Duct Hearts play melodic indie-like emo that’s pretty radio friendly and accessible. Mid-way through the song there’s a brief moment of silence as the guitar fades out and then in again, presenting a louder and more off-kilter side to the band. The minimal use of vocals during the second half of the song reflects the feeling that Duct Hearts is trying portray and while the quiet/loud dynamics bring excitement and expectation to the fore. This is a bold piece of music from a band that isn’t afraid to defy convention or follow their own hearts. Musically it’s brilliant. Music is in a healthy state, you just need to know where to look.
(this noise is ours) 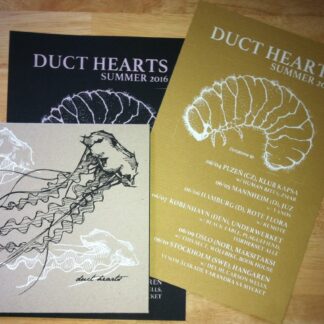