I’m trying to start February off with a bang. This split featuring Sweden’s Det är Därför vi Bygger Städer and America’s Coma Regalia is what I’m kicking things off with. It was released last September via Miss The Stars, Odebygd, Through Love, Middle-Man, Zegema Beach, Time As A Color, Friendly Otter and Samegrey Records. I can’t be sure but I think that Det är Därför vi Bygger Städer may contain members of No Omega (please correct me if I’m wrong). Anyway, they’re a fairly new band and have so far released four splits (including this one) in the space of about a year and this was the something like the fifth release that Coma Regalia appeared on in 2016 (I’ve mentioned previously about how busy they are!).

Cleanly sung Swedish vocals and clear guitar melody belays the fact that Det är Därför vi Bygger Städer are a screamo band. It’s a unique and engaging sound that flows into the kind of violence that will be familiar if you’re a fan of the release from the labels involved. They’re not a one-trick band and on Alla Mina Vänner they show different sides and sound assured with it. Coma Regalia present what could be one of their longest ever songs with An Apology. Like their split mates, they’re restrained and explosive in equal measure. Swathes of indie, post-hardcore and screamo makes up the instrumental bedrock of their song, while the vocals also flit between cleanly sung and violent. Coma Regalia is definitely one of those bands that I’d love to see live, having heard so much of their music over the last twelve months. It’s been my first time hearing Det är Därför vi Bygger Städer and they’ve also got under my skin thanks to this split. I shall investigate them further when time allows. Great split even it is all too brief.
(this noise is ours) 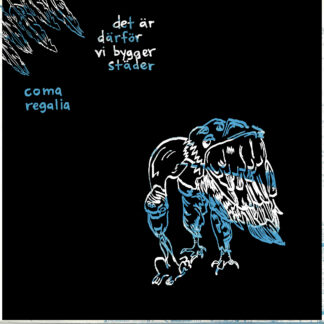