This actually came out in 2007 but I only picked it up recently as I was kinda intrigued by the songs I had heard on their website. The Grand Color Crayon play this crazy metal/screamo/hardcore amalgam that took me by complete surprise. There’s chugging, chatting, roaring (?!), skramming and melodies to mention but a few of things that appear in their songs. It’s pretty insane and incredibly messy. Anyway, there’s two songs on this split; the first – ‘Walking Past the Boys and Girls’ starts off really nice but by the time it reaches 2 and a bit minutes I’m getting a tad bored (and it carries on going for almost five…). The second track’s way better though. It’s shorter and has got some really great off-beat grooves in there (as well as plenty of ‘chaotix’) which I find uncommon with this sort of thing.

These guys are a noisy bunch and it didn’t occur to me for a while that all I was hearing was one guitar, vocals and drums (there’s 3 of them), so kudos for that chaps! (collective zine) 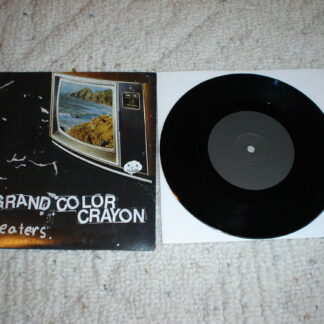