Wowzers, this thing is E-M-O. I have not seen anything this emo since the Storm The Bastille/ Tumer Street Conspiracy 7″, which came sewn inside what looked like a second hand piece of twenty year old curtain. This is truly beautiful. The front shows a face staring despairingly/longingly into green rain or streaking smog, and the back comes with a lovely quote about how this record is a jagged honest shard of their hearts, lovingly assembled and willingly offered to you.

Seriously it did. The cover comes adeptly lashed together with a piece of green ribbon, in which lay my problem. I as a lazy child did not complete my scout approved “knot-making badge”, and some member of one of these bands evidently did, as the knot in the ribbon was both fiendishly assembled, and nearly the ruin of me. Cutting something this lovely would clearly constitute crimes against art, emo and probably humanity. My knot-resolving skills are sadly rather poor. Thankfully a safety pin eventually came to my rescue, and allowed me to prise open the protective shell, meaning I could feast on the succulent delights concealed inside the defensive cardboard jacket.

Upon opening this, I stole a brief glance at a gorgeously put together full colour inlay (You’re spoiling us, dudes!) before the record sobbed all over my arms, fell from my grasping futile hands and scuttled straight into a dark corner wailing piteously all the way. After a brief, but notable tug of war, I managed to artfully prise the record from under my bed, and pinned it unwillingly to my record player with the needle of truth. Some atmospheric whistling proceeded to lazily float into the atmosphere, melding effortlessly into crashing guitars with some decidedly German vocals sobbing piteously in the foreground. Except they aren’t from Germany… I wasn’t expecting much, as mean-spirited people had informed me that Her Breath on Glass were very generic and not worth the effort. WRONG. wrong wrong wrong. Wrong wrong wroooooooooong.The vocals are distant and tenebrous, sounding like they’re rising from stygian depths and then bursting into a crescendo over pounding drums and hissing despairing guitars. A brief chiming breakdown presceeds the climax of the second song, with the breathless vocals battling the raging guitars, with both abruptly dropping off.

Spinning over, Sofy Major start with more ferocious intent. Slashing guitars flail and rend in the foreground, before the lead singer starts emoting desperately all over my shoes. It’s all very Frenchmo, but doesn’t quite reach the same heights as Her Breath on Glass manage. I’m fully with Sofy Major the first minute or so into “oui”, but somewhere the momentum drops, and they fail to fully carry me. I suspect this might be due to the fact that they only manage to squeeze in one song.

A note again to how beautiful this thing is, with the full colour inlay. Someone spent fricking AGES on this. You don’t normally see this much effort going into a humble 7″ release, and I fully look forward to actually bothering to take notice of further/ previous efforts by both bands. 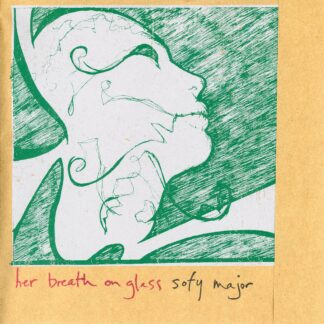