covers are in good condition, unlike shown on the picture

Go White Bronco consist of three guys from a variety of bands including Iron Chic and Small Arms Dealer (the only two I have heard from the listing on Bandcamp) and they have a sound hugely different to both of those two bands.

The approach is entirely acoustic, but in a way that seems to be quite different to that adopted by most of the other “punks” who have gone down this route over the past few years. Where others tend to still fill their songs with angst and vitriol, albeit disguised as something more “listenable,” Go White Bronco produce two tracks that could sit snugly on the soundtrack to the film Juno or any number of indie films. There is a raw, basic quality to these two songs that is tempered by the totally relaxed vibe both “Life as a Monument” and “Danger Is My Middle Name (Lullaby for a Bastard Child)” have.

On the first spin, I wasn’t quite sure what I’d let myself in for, but the title track has since become an almost omnipresent soundtrack to my working day as it is really good to listen to directly or in the background. Likewise, the flipside, which does have a lullaby quality to it, has a beautiful feel and adds to the charm of this release.

I know that to purchase the single might be a stretch too far for some punks, but check it out on 86’d Records’ Bandcamp page where you can download this for whatever you want to pay. I for one would really be interested in hearing a full-length from these guys to see if they could keep the quality and interest levels up for 10 tracks. Hopefully, this won’t be their last foray into releasing their music.
(punknews.org) 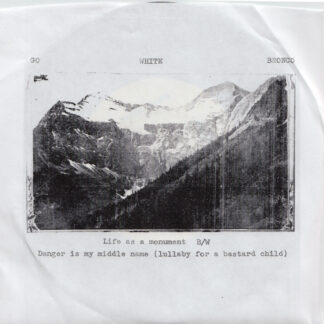