European screamo on the depressing and post-rock-ish end of the spectrum. digipack CD

Art and culture as we know it today began in Europe. Hell, Beethoven was dead and buried before Australia and the US were really official countries. With that in mind, it almost seems crazy that when we look to music today we rarely look to anything that isn’t sung in English – which is crazy because music is supposed to be the universal language. Or is that love? Whatever.
I get it though. We like to know what a song is about and the lyrics are the key to understanding. But we know there’s more to music than the lyrics. If there weren’t, why do I get that tight feeling in my chest throughout most of Tunnel Blanket by This Will Destroy You? Why do Sigur Ros’ non-literal Vonlenska lyrics move me so much?
It’s because, as humans, we don’t need words to express feeling. We can read it on each other’s faces, see it in the way we move, and hear it not in the words we say, but how we say them.
I don’t have a goddamn clue what the vocalist of Vi Som Älskade Varandra Så Mycket is singing about (or which one he is, to be honest) but I know it’s sad as hell. I didn’t even know what the Swedish band’s name meant until I looked it up (it’s along the lines of “We Loved Each Other So Much” according to Google Translate) but I listened to their new record once and instantly knew what they were saying.
Den Sorgligaste Musiken I Världen translates to The Saddest Music In The World and it’s a fairly apt title. The band plays a distinct European skramz and it’s definitely on the depressing end of the spectrum. I’ve seen comparisons being drawn to Suis La Lune and there are certainly similarities, but where their fellow country-men sometimes opt for the noodl-y/twinkly side of scream, Vi Som swing towards post-rock.
Den Sorgligaste Musiken I Världen is the band’s first full-length release as far as I can tell, and while only eight tracks long, it still manages to come in at around the 41-minute mark. While the record maintains a sense of passionate energy throughout, the song structures are controlled and patient. Beginning with the very first track ‘Leva Som Snö’, the band shows that they’re not afraid to pull the song back when they need to. It’s this room to breathe that really gives you the time to appreciate how tightly Vi Som comes together as a band.
The guitars work together, weaving between the tracks and alternating between setting the rhythm and floating above in a paradise of pedal-induced guitar tone. Listen to the tracks ‘Det Liv Vi Ville Ha Var Inte Det Vi Fick’ and ‘Ett Hjärtats Svedjebruk’ to understand what I mean. If you like your skramz to have some breakdowns thrown in, you won’t fid what you’re looking for here.
Vi Som’s drummer and bass player are really a double team and a force to be reckoned with. When the guitars get a little carried away with their post-rock influenced adventures, its the drums and bass that keep the songs moving in a forward direction.
I spent a lot of time at the start of this review talking about, in a long-winded way, how we don’t need to understand someone’s words to understand what they’re saying. Den Sorgligaste Musiken I Världen really is a great example of this. The vocals are strong and heartfelt. I don’t know what they’re about, but they’re so confident in how they’re about it that it really doesn’t matter.
It can be a step out of your comfort zone to listen to music with vocals in another language, but a large part of music is pushing yourself into uncomfortable situations. It’s why we travel an hour away to see bands we barely know in little DIY spaces filled with people we haven’t met, and why we treat those people like long lost friends as soon as the music starts.

(The Last of Our Kind Zine) 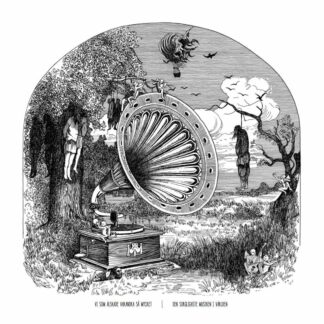