very limited 7″ celebrating the 10 year existence of duct hearts. this is basically half of the divided by water compilation.

listen to the songs:

when we had the divided by water 2×7″ pressed a few copies of the c/d side records were missing/faulty, so we ended up having 7 spares of the a/b side. so now, 10 years after the split 7″ with mio came out (actually this would’ve been in late 2019 but whatever!) we thought it would be nice to use these as a little anniversary release. they are handnumbered out of 8, but only 7 exist. so there is no 7/8. sorry, my mistake! this comes in a handstamped and handwritten inner sleeve with a spare copy of the cover cut down into a vertical stripe. also includes the full inlay of the 2×7″ version

Trembling Hands’ song Rewind And Repeat provides a great balance of melody and controlled violence. They definitely sound more hardcore than I was expecting, but when they settle down their music is pretty spectacular (not that their louder stuff isn’t!). Duct Hearts follow on with an equally heavy hitting effort. I’m A Cat Person has a really cool grunge-vibe going on initially and the clean singing works great with driving guitars. Like Trembling Hands before them, Duct Hearts also make use of introspective passages to accentuate their song-writing and performance. 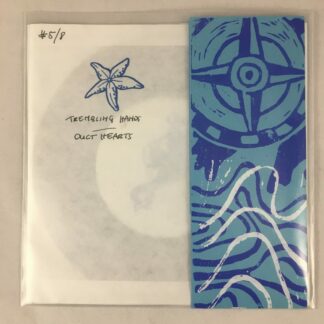