After about a decade of releasing EPs (and one live album) on their own Sect Appeal Records label, Shake the Curse is the debut full-length from This Sect—five Norwegians and a Swede based in Oslo. The group cites their affinity for post-punk, new wave, and “UK sounds from the late-’70s and early-’80s”—circles for which my knowledge is very limited, so my ears tend to pick out Fugazi-esque runs (or even sporadic moments reminiscent of The Police) on top of the aforementioned influences. That being said, I do tend to get really excited when I stumble upon a band that does this right, and This Sect is certainly one of those bands.

Straight out of the gate, one of the coolest aspects of the recording for me is that the guitars are hard-panned—which not only highlights the pulsing basslines and firm percussion by giving them a central home right in the center of the mix, but emphasizes the fact that the guitars barely ever play the same thing, and are often following completely separate paths that miraculously cooperate and only occasionally converge during a surging, catchy chorus (see the excellent “Lines on a Trail,” for example). You might get a bouncing, winding melody on the left contrasted by jarring, noisy textures on the right; or jangly, staccato chords from both, but at different intervals—rhythmically bouncing back and forth rather than lining up over the same pattern. (Check out “Bookburner” for a total mindfuck of swirling riffs and effects that work shockingly well despite never really locking in with one another.)

This Sect’s journey is a dark one, but dynamic and memorable as well. Tons of vocal layering and harmonizing add to their frantic energy—constantly wavering between half-spoken, sung, and slightly more aggressive shouts—and you can tell they’re drawing from a wide range of influences. “Calligraphy With a Brick” may come across as a more modern take on Joy Division with its classic, plunky basslines and handclaps; but that’s immediately followed by the two-minute new wave punk blast of “We Got Love,” which unloads quirky synth melodies and a driving chorus—not to mention dropping in an overdriven guitar solo for good measure.

Seven-minute closer, “Heritage Crown,” marks the most drastic change in direction, however. Its slower pace and restrained atmosphere (guitars sinking in beneath bass and keys) are more wholly bleak than the rest of the material. It certainly makes sense as an endpiece: if this was the first song you heard, you’d get a very different impression of the band.

But again, by contrast, I make no secret of the fact that I’m a huge sucker for hooky choruses, and this album is loaded with ’em. The anthemic chants of “Party Like it’s 1939,” the stuttered pops (literally) of “Copulation Control”—just a couple of examples of how said catchiness can complement the somber intrigue of this niche so very well. (This Sect’s overall approach actually brings to mind This Et Al, another incredible and sorely underappreciated act. Sadly now defunct, their lone full-length, Baby Machine, is absolutely mandatory if you haven’t heard it.)

Shake the Curse is sold digitally, or as a gatefold LP that includes the album on CD. (Nice touch!) The clean, crisp layout keeps it simple—presenting all of the lyrics, a bit of photography (capped off by the absolutely gorgeous cover photo, shot at a Moravian Church cemetery in Greenland), and that’s just about it. The lyrics are intelligently composed and conceptually suggestive—neither too specific nor overly vague—and that’s just how I like ’em:

The trophy daydream has a body, has a form
That’s its head firmly mounted on the wall
A damn fine conversation piece
As we stagger, we limp in line
In a life of truth-crime
Perfect tans, retarded sunshine

All in all, this is an excellent album from a really interesting band. Very much recommended for those interested in any period of post-punk. I haven’t yet had time to check out This Sect’s prior releases on Bandcamp, but I certainly need to do that, too!
(http://www.noecho.net) 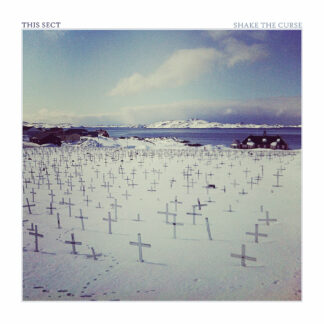