Gas Up Yr. Hearse is a five piece band from Bloomington, Illinois who formed in the winter of 2012, from the looks of things. Gas Up Yr. Hearse play a chaotic, spazzy, and volatile style of music that incorporates elements of hardcore punk, and screamo within their sound. Musically, Gas Up Yr. Hearse can be loosely compared to bands such as Holy Molar, early Locust, Louise Cyphre, and other like-minded bands. Since forming in 2012, Gas Up Yr. Hearse have released a self-titled demo in February of 2012, a split with Fire Academy in January of 2013, a five song EP titled A Banner Year For The Sum Of Our Losses in January of 2013, appeared on the Swollen Lungs records compilation in May of 2013, a six with split with Coma Regalia, Anodes, Dessa Sons, Acidic Tree, and The Story Changes in January of 2013, and a split with Coma Regalia in June 25th 2013. On their side of the split, Gas Up Yr. Hearse offer up three tracks of chaotic and volatile sounding hardacore, punk, screamo. The next three tracks come courtesy of Iwakura. Iwakura is a four piece band from Denver, Colorado who formed in 2014, from the looks of things. Iwakura play a killer style of music that incorporates elements of hardcore, punk, screamo, and emoviolence within their sound. Musically, Iwakura can be said to be influenced by bands such as Jerome’s Dream, You And I, Resurrectionists, sand other like minded bands. Since forming in 2014, Iwakura have released a six song demo EP in February of 2014. On their side of the split, Iwakura offer up three tracks of chaotic, blistering, and volatile as fuck sounding hardcore, punk, screamo, and emoviolence.

Be the first to review “gas up yr hearse! – iwakura split 7”” Cancel reply 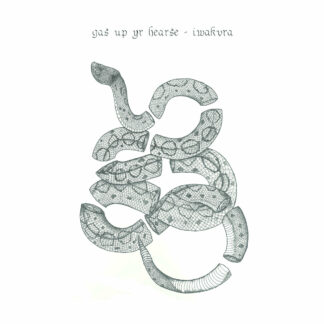