“Boréal” was written during a self-destructing time for some people around and inside the band. The songs collect all the grief and tribulations of a trial aiming to coexist in an revolting social environment. It procures the most intensely emotional and aggressive songs the band has ever written. They recorded 5 songs as 5 steps in a migration, 5 songs as 5 moments in emancipation. Each chapter delivers melancholic melodies crashing into a powerful song. “Boréal” is an album, a collection of emotional and musical panoramas underlying landscape metaphors. The trip is leading in the boreal geography, carrying away the listener from the gravity of a forest to the pristine wilderness of Arctic. Steps into the prairie, taiga and tundra imply the audience in some poignant scene of sorrow and tearing off moments. The EP relates the retreat of a person searching for clarity and peace. This retreat reveals much as the distance between a man and the society than the proximity between a man and a depression, dying his life in transparency. The images are veiled to suit everyone who could be wandering. Composing the EP as a whole, the band worked once again with the graphic designer and tattooist Tommy Knuts to get a coherency between lyrics, music and artwork. Between symbolic and realistic traces, the design is made with handmade pictures expressing each act. The artist delivered a comprehensive packaging for this “musical portfolio”.

Be the first to review “fake off – boreal LP” Cancel reply 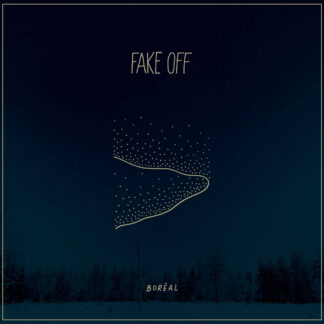