The four-piece from Milan, Italy have succeeded in creating a coherent, concise and abrasive hardcore record. “coarse”, their 2nd full-length is a fantastic example of how a straight-forward hardcore record should be. It’s visceral and unapologetic in its delivery and approach. Roughly 30min. – 11 songs, and a whole lot of pissed-off emotion – blasting, roaring shouts packed with a whirlwind of riffs going through a mixture of genres. Since their inception in 2012, COUNCIL OF RATS can be described as a blend of everything that hardcore has always stood for. Despite the fact that every song is a confrontation, there’s also a great deal of sensitivity contained the tracks. The emotional sensitivity doesn’t undermine the pure rage. Compared to their early work, “coarse” shows the band at their most confident, focused, and most importantly, their most viscerally impacting. “coarse” does not fail to deliver prompt and hyper effective firebrands. It’s fast and inflexible, conscious, angry and most of all, pissed as hell. “coarse” allows no time to catch your breath. COUNCIL OF RATS strikes fiercely and it’s still pretty good to hear such bands carry the torch of engaged music within the hardcore spectrum. Mastered by Brad/Audiosiege to get a scintillating result – the kind of record that hammers you from front to back – riffs aplenty, socio-political themed lyricism and musical complexity ensure an avid listener won’t get bored. Regardless of what you’re into, this is a record you have to hear. It’s fast, it’s hardcore, it’s punk! 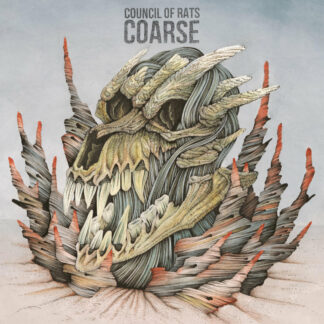