If you’re looking for music to get lost in, then look no further than War Honey’s Shard To Shatter, an EP that I still struggle to believe is the band’s debut.

Dreamy slowcore indie influenced by Slowdive, Crumb, Cigarettes After Sex, Modest Mouse, and Nick Cave. This EP is ripe with lush atmosphere, driven by the soaring operatic vocals of Gabrielle Dana that incorporate socially conscious and often surrealist lyricism. Ben Fitts’ ethereal guitar work reverberates across a vast sonic landscape, with mesmerizing melodies as well as dark textures. Shard To Shatter is a haunting and majestic journey that leaves you yearning for more from this burgeoning young Brooklyn band.

Dana and Fitts originally met as teenagers at band camp. After several years of being in different bands, playing everything from blues to extreme metal, the two decided to finally work together and formed War Honey in 2019. 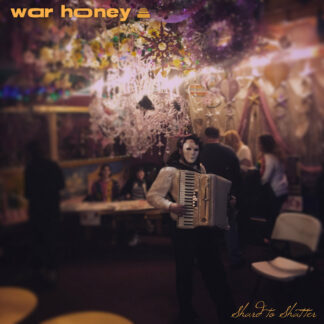