After releasing a couple of 7”s in Leeds a few years ago, guitarist Jon Mohajer returned home to South Wales and reformed his band Twisted with a completely new line-up. From what I have heard of their older material, Utopia, their first LP, is pretty different. Twisted are a band that can be roughly put in the genre of ‘garage-punk’, but there is more going on than that label would suggest. There is definite influence from classic ‘70s punk rock, newer garage punk and the darker material from The Wipers, but I would probably just shelf Utopia under ‘punk’. There is something Stooges-like in the chaotic, unstable way that Twisted unravel during the record, where the band seem to be working outside of their comfort zone.

There are a few quieter, introspective moments dotted throughout Utopia, when the listener is allowed a breather from the seemingly relentless, anarchic wall of sound pummelling their ears. This is punk down to its bare bones. I don’t mean that it is simplistic or dull; rather, it’s raw, unpretentious and free of any bullshit. This is as pure as punk gets in many ways, and I found that a little over-whelming at first. Upon first listen, I felt that Utopia was a scuzzy, barrage of noise, with not much to distinguish one song from another, but many listens later and I realise that this is a pretty damn diverse album. For instance, the mid-tempo, melodic yet gritty closer “Elixir” is different enough from the choppy-change-y “The Gulf” to distinguish, yet both are clearly from Utopia by Twisted. Livi Sinclair’s vocals are probably the link between each of the songs and perfectly fit the chaotic nature of the music: passionate, gritty, irate. I love how there are underpinnings of seeming desperation in the vocals, too. It adds another layer to the lyrics. The vocals perhaps get a little much at times, but so suited as they are to the music, it doesn’t really matter too much. All in all, this is a challenging, yet unpretentious, truly punk record that is pretty special for a debut album.
(keeptrackofthetime.wordpress.com)

Be the first to review “twisted – utopia LP” Cancel reply 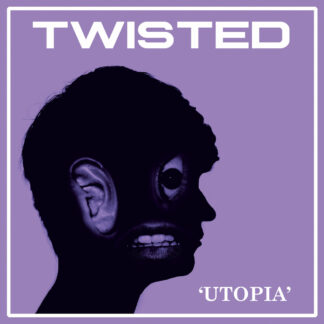