On May 21st, 2013, The Story Changes bring a welcomed sunrise to the music of the last decade, as their artwork depicts from the band’s 3rd full-length studio album, Static And Trembling. The new album revisits ‘A Better Time In Music’ which sounds more like the greats of the 90’s than anything released in the previous ten years. The band find themselves echoing the sounds and songwriting skills of pinnacle 90’s artists like Smashing Pumpkins, Nirvana, Shiner, and more, while still maintaining a sense of their own identity. Mark McMillon, the vocalist/guitarist of the two-piece, reminisces on the inception of the record; “From the earliest conversations going into the record between myself and my bandmate Chris, or “Poppy” as most of us call him, we knew we wanted the overall feel of the album to be a nod to the late-’90s alternative and punk scene that influenced us growing up.” Even the production on Static & Trembling at times seems to pay tribute to alternative music’s purer past, with tones that evoke the quintessential recordings of J. Robbins and Steve Albini.

The 14 track album was produced and engineered by Micah Carli (of Hawthorne Heights) at Popside Studios in Troy, Ohio, mixed and additional production by Jamie Woolford (The Stereo, Punchline, Gin Blossoms), and mastered by Dan Coutant (Hostage Calm, Lemuria, Into It. Over It.) which built a comfortable setting to amplify the band’s already superlative sound. “I have been playing guitar in Hawthorne Heights with Micah live for around three years, and I knew we worked well together,” McMillon explains. “Micah really pushed us to try some new things on this record that I think we were a little too scared to try on our own. Sometimes after being a band for so long, you feel almost stuck on how you are supposed to sound and what feels natural within the sound of your band. I think the end result was honest and pure.”

The Story Changes are no newcomers to the music scene. Static and Trembling will be their 3rd full-length record since 2004. The band has stayed incredibly busy with their extensive discography of 7″, EP, and compilation releases as well as their boundless hunger for touring and playing live shows.
While many bands find themselves with nothing but deadlines, the opposite was true for Static and Trembling. The Story Changes welcomed the opportunity and ability to not only make the album they wanted to make, but to make it at their own speed. McMillon narrates the process; “We had no idea how long it would take to finish writing the album. Two months? Two years? We’ve been an active and busy band for a long time, so it was extremely hard for us to get used to just sort of stopping the normal routine, but after we got used to it and got into the writing process for the album, it was absolutely what we needed. This was the first time we wrote songs for an album that didn’t have a deadline, didn’t have to be released for an already-planned upcoming tour, etc., and it felt so liberating. We got together to write and work on songs when we felt like it and when we had the time. When it felt forced, we simply didn’t force it.  Fast forward to almost a year later, and we have written my favorite the Story Changes album to date, and we couldn’t be more proud of it.”  Static And Trembling will be available on May 21st, 2013 on Vinyl/CD/Digital coordinated by I Am Shark. 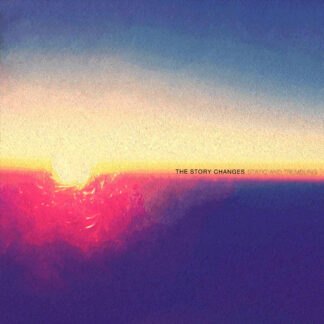 You're viewing: the story changes – static and trembling LP €10,00
Add to basket