noemienours – songs from the life of bears 7″

to me there’s no better thing to have (in the distro as well as a collection) than a vinyl record released by the artist herself.
noemienours offers late night lofi lullabies, sometimes with piano. always with muffled vocals and tape hiss. (that’s what andy malcolm says)

Songs From The Life Of Bears is very different to most of what is reviewed on this site, but it’s such a beautifully sad record that it’s worthy of covering. Comprised of four slow bedroom recordings, the music of noemienours is reminiscent of an ultra low-fi version of Grouper, with gently sung/spoken lyrics over sparse guitar or piano. The EP is so achingly tender and fragile that it can’t help but be charming in the best possible way, and is perfectly suited for late nights and loneliness. It’s probably the most deceptively beautiful record based on animal rights and bears that you’re likely to hear.

Opener ‘The Life Of Bears’ sets the scene, with tape hiss covering the sparse piano and gentle vocals in a way that only adds to their fragility and tenderness. The tape hiss fills in a lot of the gaps and pauses in the spaces left by the piano and vocals, to the extent that it almost functions as an instrument in itself, rather than simply being a side effect of the low-fi production.

Despite containing only four songs that are all built upon similar structures, there’s enough variety within them to hold attention. The guitar-led ‘The Winter-Life Of Bears’ has less space than the other tracks, though it still paints a musical picture that matches the title and lyrics, and it comes across as if inspired as much by Joni Mitchell tracks such as ‘Little Green‘ as it does more contemporary ambient, low-fi experimental pop artists like Grouper. ‘The Threat’ is perhaps the saddest of the four tracks on offer, being the slowest and with the lyrics coming through most clearly, though closer ‘The Disappearance Of Homes’ could also put in a strong claim for that honour, with the vocals being slightly hidden beneath the piano, giving them an extra air of sorrow and separation. That it fades out, rather than comes to a close, feels rather fitting.

What the above doesn’t express is how easy it is to lose yourself in this album. Listened to in the proper environment – at night, alone, on headphones – it’s easy to find hours slipping by as these four songs cycle by on repeat. The hold that Songs From The Life Of Bears can have on the listener is impressive, absorbing you in to an other-worldly place, removed from wherever you currently are to somewhere more open, surrounded by nature. This is perfect for winding down with at the end of a day, whilst also having substance beyond simply being a lovely collection of songs.
(thesoundnottheword.wordpress.com) 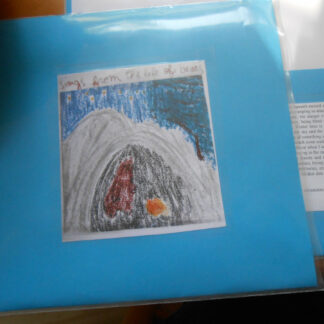 You're viewing: noemienours – songs from the life of bears 7″ €6,00
Add to basket