orange vinyl, 12″ vinyl record with a 7″ play surface. It has been lazer-cut into a flower shape.

It’s this union between the two bands that makes the concept behind the ‘Flower Split’ that bit more unique than most, with both bands not only producing unheard originals from their own respective outfits but also having the courtesy of covering each other, with Nai Harvest contributing a glowing rendition of playlounge‘s ‘Sweet Tooth‘ from EP ‘Thrash Magic‘, whilst the latter band produce a cover of ‘Floor’, taken from Nai’s 2013 ‘Whatever’ LP. The results of this idea make for a unique twist upon the split concept and a wholly engaging listen.

Nai Harvest’s ‘Buttercups’ is the first slab of cinematic and impassioned songwriting to kick off the EP, all shimmering and immersive, embracing a nebulous of translucent guitar tones and flurry of drums that underpin the two-sided nature of the song, with buttercups acting as the comely image to mask the gut retching undertones of the chorus lyrics which vehemently read, ‘I don’t want to feel like a lowlife / Stab me in the chest with your knife’. The following cover of playlounge’s ‘Sweet Tooth’ continues in the same rush of emotion, as the grit and dense wall of sound found amid the Thrash Pop production is completely nailed, with Ben Thompson replications of Saam Watkin’s vocal inflections being a highlight.

playlounge take up the gauntlet with the churning ‘Handclap Cinema’, offering a songwriting format that is both abrasive and original as the piece carries itself in the same ethereal manner we’re accustomed to from the Brighton-via-London duo, before imploding completely one third of the way in and sullenly sinking into a rich mesh of skuzzy feedback, giving way to Laurie Fosters chord strums that pop in and out spasmodically. The rawness of this ending is complimented wholly on the rip-roaring cover of Nai Harvests ‘Floor’, being loose, charming and acting as the cacophonous closer to the EP.

Both bands exude a certain level of magnetism throughout the records 12-minute running time and demonstrate that together, Nai Harvest and playlounge are in perfect union with each other in terms of sound and mindset, making what occurs on this record a thrilling listen from start to finish, acting as a finite lesson in modern day Emo done right and a gracious soundtrack to a summer that’s just been.
(waxmusicuk) 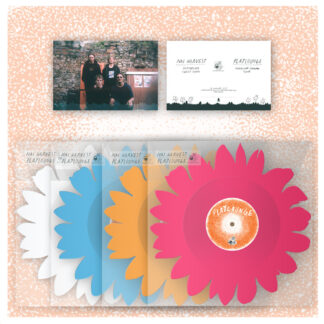