“I’m Not High, You’re High” is the closing of a chapter. After many attempts to utilize the songs for splits and a 5″ release, we realized that these tracks should have never been separated. They represent a very important time in our lives. We felt the need to salvage and maintain these recordings in the manner we thought most fitting. With the exception of two songs, this album was written following a fairly long and impactful acid trip. This trip took place on foot from West Roxbury to Brighton, MA around midnight. The three of us – Brian, Walker, and myself – embarked on a “journey” we would never forget. Except for Brian, who can’t remember disappearing into an alley of dumpsters exclaiming that he was “going home”. If it wasn’t for our bud Walker, we may have never made it home. He was making us laugh so hard that it was cruel. It’s why we have decided to use his face as the album art. It’s why we have used this quote he spoke to me that very night for this new record.

It’s why everyone needs a buddy like Walker Desing.

Be the first to review “monoliths – i’m not high, you’re high 7″” Cancel reply 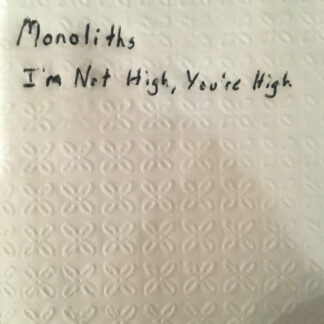