Yes they really did name their band that; I’ll get to them in a minute. Pure Heart Records have had solid output since their inception, at least if you have a euro skrammer heart. Question: are Lora named after the Noisy Sins Of The Insect song? I’d like to think so. They remind me that I’ve been listening to too many bands who sing recently and not enough emoviolence. I forget the technical definition of emoviolence but this just feels that it fits the bill – it’s terrifying. Like a less technical Daighila and not too far from Process Is Dead, the vocalist must be coming close to wrecking his voice after each set they play. It is very samey and lacks the “refinement” of the earlier two namedrops but it’s an effective 6 minute sledgehammer to the eardrums.

The second band, who I can’t bring myself to type the name of a second time, also bash away at the listener for 6 minutes. There’s more of a classic React With Protest guitar feel (ala Singaia) in how they jump around with their chords. The vocals are not a million miles from Spirit Of Versailles (i.e. high pitched and shrieked). They play a slow bit for a minute four minutes in and I’m thinking they must be into Louise Cyphre, because it’s got a similar stop-start shambolic feel. Look, change your name to a quote from some obscure but cult piece of literature, and keep working on your sound, and you’ve got something decent going on. No old school fan is going to pay too much attention to this but what we have here is a very reasonable modern era release.
(collective zine) 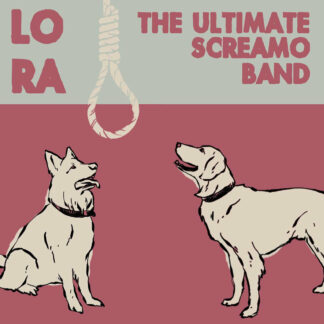