With its stylized front image of a fox in an impressionistic arctic landscape, it’s tempting to hear Football, etc.’s new EP, Disappear, as the chillier, more stark follow-up to the band’s warmly melodic, even effusive 2013 breakthrough Audible. Where Audible found the Texas trio merging the bronzed guitar trickle of second-wave emo with the breezy motion of power-pop, Disappear hinges on the glacial pace and pared-down lyricism of Mineral and fellow Count Your Lucky Stars labelmates Joie De Vivre.

Songs like “Fair” sparked with bright melodies and a clean-burning sense of atmosphere. Disappear, for its part, seems entirely more staid, somber even, as opener “Sunday” finds Lindsay Minton stretching her syllables just about as far as they can go without breaking, eschewing the band’s once glowing tunefulness for something more solemn. The song matches, keeping a stately pace and focusing on its spare layers of organ and fleeting harmonies. It’s that sense of careful detail that carries the 7” when the songs don’t always catch. Even when the album’s more deliberate speed and diffuse melodies leave less surface to grip, the band itself has never sounded better, with Mercy Harper’s flexible, melody-rich bass especially salient amongst the EP’s stylish austerity. Ultimately, the EP itself becomes an experiment in mood, a concept album of sorts devoted to modern emo at its most measured and judiciously arranged.

“Open”, which closes the EP, benefits from a dark palette, adding a rich swath of violin and some gauzy harmonies to the song’s icy minor key. Even better is the song’s chorus, the most immediately striking and compelling of the EP, and the moment where Minton does the best job finding a hook to match her newly minimalistic narratives, this time making something gripping from the words “I’m not”, recalling the acerbic tunefulness of Pedro the Lion’s Control. Elsewhere, “Sweep” borders on slow-core, ticking away at a methodical pace that nicely accentuates the song’s fine sense of texture (J. Robbins, who produced the EP and maintains his thoughtful ear for emo’s finer gracenotes, brings his signature knack for proportion and balance to the band’s whittled aesthetic) but also gives the song a faint feeling of lethargy.

That Minton’s melody never quite finds purchase – like Chris Simpson at the height of Mineral, these stretched out syllables become increasingly hard to land – underlines the ways in which Football, etc. seem to still be working their way into this new aesthetic. In that sense, we might think of Disappear as transitional, a moodier, more withdrawn pivot away from the ebullient energies of Audible. “Receive”, which does maintain some of that album’s galloping dynamism, also finds room for the sedate, fine-grained aura that defines the rest of Disappear. The song reaches a middle ground that is absolutely striking and finds the trio achieving new symmetry with audible confidence, balancing their twin gifts for poignant mood music and effervescent élan.

Be the first to review “football, etc. – disappear 7″” Cancel reply 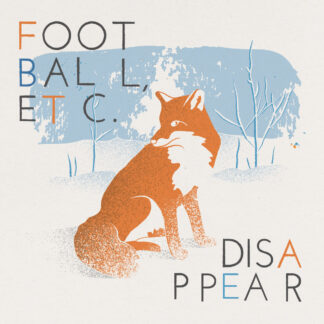