Gravity starts off with an unexpectedly emotive piano intro on Pulse. It certainly builds expectation for the rest of the record. What greets you on Less Than A Stranger is hardcore filled screamo that flails to the sound of double bass and thick guitar. There’s a massive soundstage during the opening 60 seconds before Crowns & Thieves settle down with gentler clean guitar. They progress through movements filled with introspective calmness and outright heaviness in the same way that No Omega did on their 2012 LP Metropolis. It’s just hardcore that fills your ears when listening to Gravity. Ghosts features some great off-kilter metal guitar that takes things in a different direction for a time. The atmosphere they create in the second half of the song is menacing but also hauntingly good. The delivery of Gravity gets stronger and stronger, with Release Me I: Shelter hitting an even higher plane. Even the spoken word mid-section is backed up by an huge instrumental barrier that seems to level everything it comes into contact with. With …And If We Are Still Breathing, Crowns & Thieves take a step back and provide a shorter musical interlude of sorts. They use woodwind instrumentation and other musical effects to good effect, which changes the pace. They hit back with Release Me II: Hopeless, which feels slightly more condensed and focused. The caustic screams in the song really make it a cleaning experience to listen to. There’s a hint of clean vocals during Days We Used To Love, but only a brief one as Crowns & Thieves prefer to continue to pave their way through the song. The clean vocals make another appearance towards the end of the song and give it a real organic, earthy feel. The band’s experimentation becomes more obvious on Lifeless, with the use of more progressive song structures that take their sound further away from the staple hardcore/screamo sound. They’re definitely a product of their surroundings and of the myriad of influential bands that make up the German scene now. Gravity seems to cover a hell of a lot of ground wit no song sounding completely alike. The big lead-work during penultimate track More Than Meets The Eye adds a metallic edge to it all. As the beat gets louder at the start of Nothing, you know that Gravity’s gonna end on a mighty note. Equally as ravaging as they have been throughout the record, they lay waste to everything including their instruments and vocals chords. There’s simply no point in dipping in and out of Gravity, because it deserves to be listened to in it’s entirety. Crowns & Thieves care not for weakness and they’ve crafted a body of songs here that embodies their spirit. Brilliant stuff and definitely worth your attention and more.
(this noise is ours)

TRACKLISTING
Pulse
Less Than A Stranger
Ghosts
Release Me I: Shelter
And If We Are Still Breathing
Release Me II: Hopeless
Days We Used To Love
Lifeless
More Than Meets The Eye
Nothing 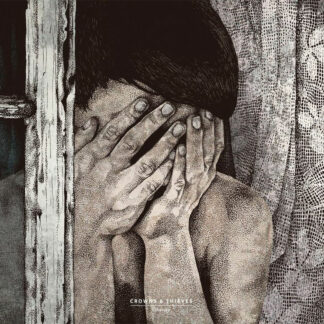 You're viewing: crowns and thieves – gravity LP €14,00
Add to basket