Crossings finally get the vinyl treatment they always deserved. Despite being dead for quite some time now, we felt that the fact their music was always released on tape didn’t quite do it justice, so here it finally is on record. Three of their biggest twinkly emo bangers adorn one side of this beautiful 7″.

Champions League offer up six brand new tracks, which are, of course, all less than a minute long! This release sees them leave behind the raw sound they have become associated with and go for a cleaner and more considered approach. Lew from Nai Harvest drums on these tracks (he also did the awesome Final Fantasy-themed artwork) and his unrelenting tightness really adds a whole new dynamic to the sound. 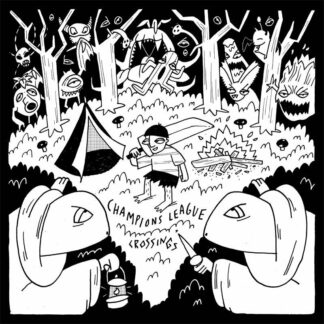