And the cover is drawn by the almighty BRIAN WALSBY!!! For those who may not be familiar with this name, let’s just say that Brian’s work marked the 80’s HC scene in the US, being published in tons of fanzines, used on a plethora of HC shows flyers as well as on record covers (notably the first press of “Walk Together, Rock Together” by 7 Seconds, but also on record covers of the bands like Melvins, Cinder, etc.)
Together with the previous two split 7″s (Values Intact / At Half-Mast and At Half-Mast / To The Embers) this split 7″ is part of a series of 4 records (the 4th one still to be announced) where the covers, drawn by international comic artists, form a story based on activism and animal rights.This is the second press edition. 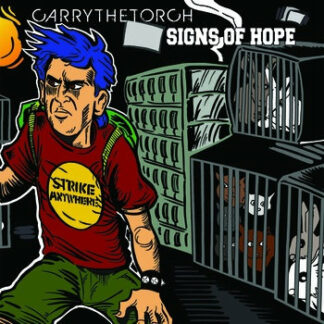