Solid punk from this french vegan anarcho band out of the city of Grenoble recalling a darker RVIVR but less pop, a bit Misfits-y, and rock n roll in the way that Neighborhood brats can still be punk as shit but with that rock edge. Vocals are very much Joan Jett – strong, deep and charming. The first song, season of the snake”, instantly caught my attention with its clean herky jerky bass throb and simplistic melody. Lucky me, I get the reviewer copy! Apparently, Alarm just did a tour in Brazil, perhaps they are headed to the states next? Keep an eye out. Released on an absurd amount of labels (CR)

Be the first to review “alarm EP 7″” Cancel reply 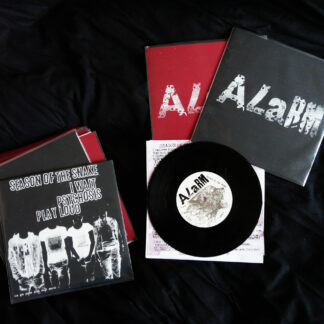