View basket “la luna – always already LP” has been added to your basket.

La Luna are a four-piece screamo/punk/hardcore band from Toronto, Ontario that formed in 2009. For the first few years of their existence they were known as Brain Fever. This changed in 2013 when they reissued their first LP, which had been recorded a year prior, and self-titled it under their new name. La Luna play a dark and aggressive brand of screamo akin to Ampere or Loma Prieta, with the technical side of things leaning towards Off Minor.

They also remind me of one of my personal favourite screamo bands ever, Mahria (check them out), who also happen to be female-fronted and Canadian as well.

La Luna released a new LP earlier this year, and I cannot stop listening to this thing. It’s solid front to back, and I’d go as far as to say it’s my favourite screamo release of the year. Definitely check out their entire discography, catch them on tour if you can, and support them in any way you can. La Luna are a phenomenal band and definitely deserve recognition as being one of the best bands in their niche around now. Enjoy.
(http://sophiesfloorboard.blogspot.pt) 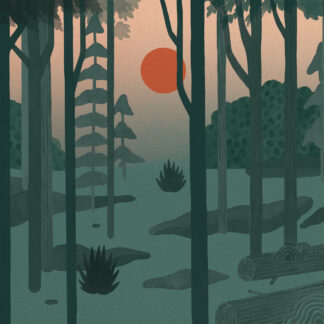