View basket “the canyon observer – fvck LP” has been added to your basket.

Split releases are like catnip to me, even more so when they include a band I am familiar with! Such is my love for this new split, is in no small part due to the inclusion of resident grime throwers Thou in a noise laden duel with Great Falls, covering none other than heavy noise mongers Shellac

Kicking off Side A, is ‘Wingwalker’ from the 1993 release Uranus, as performed by Great Falls, and man do they know what’s up! They give a tight performance of this manic track, staying pretty close to the original sound and furious fever of the vocals. It feels a little more pent up and more frustrated than the original tune, but that just adds to the ferocity. They are a bit slicker production wise, but they channel some hellacious energy into this recording. It’ll be love at first listen as you stomp new holes in your house or workplace.

On to side b, we have a vicious performance of a very vindictive song, ‘A Prayer to God’, by Louisiana sludge trawlers, Thou. First off, I love these guys; second, they make a very angry, personal song even heavier. The original is a prayer to bring ruin and pain to two people in the singer’s life, the second of which he wants to end on a hard note. Thou take that, and make it almost blasphemous in their normal, dirty way. It’s a char-filled fuzz block of a song, and my personal pick of the two on offer. If you wrong someone and they are listening to this song near you: RUN.

Splits are a great way to sample bands to see what they are about, what influences them, and how they want to bring their own energy to a project. This record does no less, giving two excellent bands, 7 inches of wax and two choice covers from a legendary band. Find it, buy it, break shit. 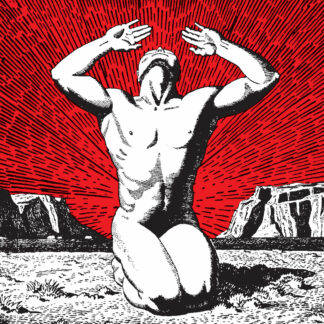